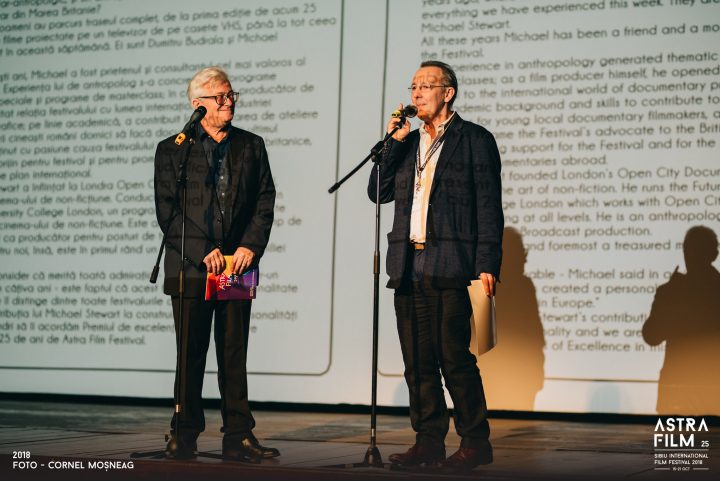 The winners of the various awards in 2018 AFF’s five competition sections were just announced at the Awards Ceremony of the 25th edition of Astra Film Festival in the Thalia Hall in Sibiu. The jurors chose the winners out of 55 titles in competition from 30 countries, selected from over 3,000 submissions from 93 countries. Prizes amount to a total cash value of over 25,000 euros.

I Am Another You by Nanfu Wang won the AFF Award for Best Documentary in the International Competition and Sand and Blood by Matthias Krepp and Angelika Spangel won the AFF Special Mention of the Jury.

At the end of the evening, Dumitru Budrala, founding director of Astra Film Festival, presented the Award of Excellence to Michael Stewart, Director of the London Open City Documentary Film Festival.

The Festival runs until Sunday, October 21.  You can find the jury statements here.

Nanfu Wang won the AFF Award for Best Documentary in the International Competition for I Am Another You (USA). The film is exploring the meaning of personal freedom and its limits through the eyes of a young drifter who rejects society’s rules and chooses to live on the streets.

From the jury statement:  We appreciated the strong storytelling skills of the filmmaker, her commitment to go deep beyond the surface. This is layered, immersive, sensitive filmmaking. It is a personal journey of discovery that unfolds before our eyes, revealing more and more facets of a very human reality.

The jury presented the AFF Special Mention of the Jury to Sand and Blood (Austria) by Matthias Krepp and Angelika Spangel. The documentary is a call for empathy from Iraqi and Syrian refugees, who recall a time when life was normal in their homelands while watching online what has become of their home countries.

From the jury statement:  We decided to give a Special Mention to a film that gives profound insight into a very complex current situation.

The Jury of the AFF International Competition was made up by Ally Derks (the Netherlands), Haruka Hama (Japan) and Liviu Tipurita (UK).

The AFF Award for Best Documentary in the Central & Eastern Europe Competition went to When The War Comes (Croatia, Czech Republic) by Jan Gebert, a scrutinizing look at the life of a typical European teenager who doubles as the head of a paramilitary group.

From the jury statement:  In ‘When the War Comes’ we witness the daily routines of a growing extremist civilian army, following the head of a paramilitary group who with ease interacts with a public system that normalizes xenophobia. This film serves as a warning as it exposes the meticulous preparations for a confrontation this is now made ever more likely.

Nebojsa Slijepcevic won AFF Award for Best Director in the Central & Eastern Europe Competition for Srbenka (Croatia). The film depicts peer violence towards children of different nationality in Croatia and how the generation born after the war copes with the dark shadows of history.

From the jury statement:  In ‘Srbenka’ we experience rehearsals that bring the audience into an intimate and at times uncomfortably raw and painful emotional space, exploring wounds that will not heal unless they are confronted with honesty. Nebojsa Slijepcevic skillfully explores the artistic process as a method for communal healing and shows that truth and reconciliation are tools that can bring closure.

The Jury of the AFF Central and Eastern Europe Competition was made up by Dina Iordanova (UK), Cristian Tudor Popescu (Romania) and Simon Kilmurry (USA).

The AFF Award for Best Documentary in the Romanian Competition was awarded to Caisa by Alexandru Mavrodineanu, for „a poignant perspective on Romanian society, showing a man who resists the cynicism around him to offer a refuge where the young  can flourish”.

Claudiu Mitcu won the AFF Award for Best Director in the Romanian Competition for his film Anniversary. The jury appreciated how „this film managed to touch and surprise us with a portrait of a strong, amusing and serene 91-year old man that avoids nostalgic clichés”.

The Jury of the AFF Romania Competition was made up by Michael Stewart (UK), Marin Martschewski (Germany) and Alexandru Solomon (Romania).

They Just Come and Go (Croatia) by Boris Poljak won the AFF Award for Best Documentary in the Shorts Competition for „its excellent camera work, its simplicity, its humour, and eventually the universal message it conveys about our ephemeral transitory existence”.

The Jury of the AFF Short Film Competition was made up by Adina Popescu (Romania), Ruben Vermeersch (Belgium) and Vintila Mihailescu (Romania).

Ink of Yam (Germany) by Tom Fröhlich won the AFF Award for Best Documentary in the DocSchool Competition for „winding tenderly and with genial skill among clichés and commonplaces to record bits and pieces of thoughts and soul”.

The AFF Award for Best Director in the DocSchool Competition went to Letitia Popa for Marie (Romania), rewarding “the love, innocence, courage and candour of a young filmmaker driven by love for her fellow human beings”.

The AFF DocSchool Competition was juried by Cristi Puiu (Romania).

“All these years Michael Stewart has been a dear friend and a most valuable consultant to the Festival. His experience generated thematic programs and masterclasses; as a film producer himself, he opened us the door to the international world of documentary production; and, last but not least, he became the Festival’s advocate to the British Council and other bodies, building support for the Festival and for the promotion of Romanian documentaries abroad”, said Dumitru Budrala, founding director of Astra Film Festival.