The selection for the upcoming Astra Film International Festival, which takes places for the 25th time in Sibiu from 15 to 21 October, is now online. The program includes 101 titles, of which 56 films will participate in 5 competition sections. A total of 11 documentaries will have their world premieres and 40 their national premieres during the Festival. The winners of the competition sections will be announced on Saturday, October 20th.

In 2018 Astra Film Festival Sibiu is celebrating 25 years of exploring and experiencing the human condition through the cinema of reality. Current complex themes and detailed portraits of culturally diverse contemporary societies will be brought to Sibiu audience’s attention through 101 selected films, all of such cinematic quality that transcend the attributes of the documentary film per se.

For 7 days, in 9 specially arranged venues in the city’s historic center, the public will have a wide choice of 101 best non-fiction films recently produced in Romania and around the world. The 2018 selection was made from a record number of over 3,000 submissions and includes 10 Romanian productions.

The non-fiction film competition will be held in 5 sections, as follows: International (with 9 selected films); Central and Eastern Europe (10 films); Romania (10 films); Short film (12 films); and Student (15 films). To these productions are added the 45 films presented outside the competition – within the thematic programs of the Festival, in the experiential setup (virtual reality and 360 degrees projections), as well as in Astra Film Junior, a festival-in-festival dedicated on training the next generation of moviegoers and documentary filmmakers, currently being at its 10th edition.

The 2018 Edition Program also includes conferences, panel discussions, master classes, networking with industry professionals, concerts, and Q&As with some of the filmmakers present in Sibiu.

“The 2018 film selection is relevant to the world we live in, where more and more daily events in the political and social sphere affect the very essence of our human condition and fewer manage to restore our faith in humanity. At a time when life really beats film, the selected productions bring novelty to the genre through both the variety and complexity of the subjects, and the stylistic approach’s creativity. Astra Film Festival celebrates 25 years of cinematic experiencing and exploring reality, in a space created for knowing and understanding the micro and macro human universe” said Dumitru Budrala, Founding Director of Astra Film Festival Sibiu.

Astra Film Festival Sibiu came into being in 1993 as a groundbreaking project in the Central and Eastern Europe. Its contribution to establishing a framework for the development of documentary cinema in the whole region, and in Romania in particular, has been consequential. It has constantly attracted industry’s attention to the art of non-fiction film by supporting the development of the genre and opening new horizons for the documentarists. Astra Film Festival 2018 is organized by Astra Film, CNM Astra and Astra Film Foundation, with the support of the County Council of Sibiu, the Ministry of Culture and National Identity, and the Romanian Film Center. The event is cofinanced by Sibiu City Council through the Sibiu City Hall. 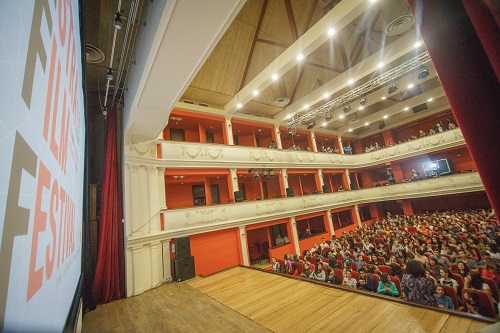