The Future is Today, in VR And Full-Dome Screenings at Astra Film Festival 2018 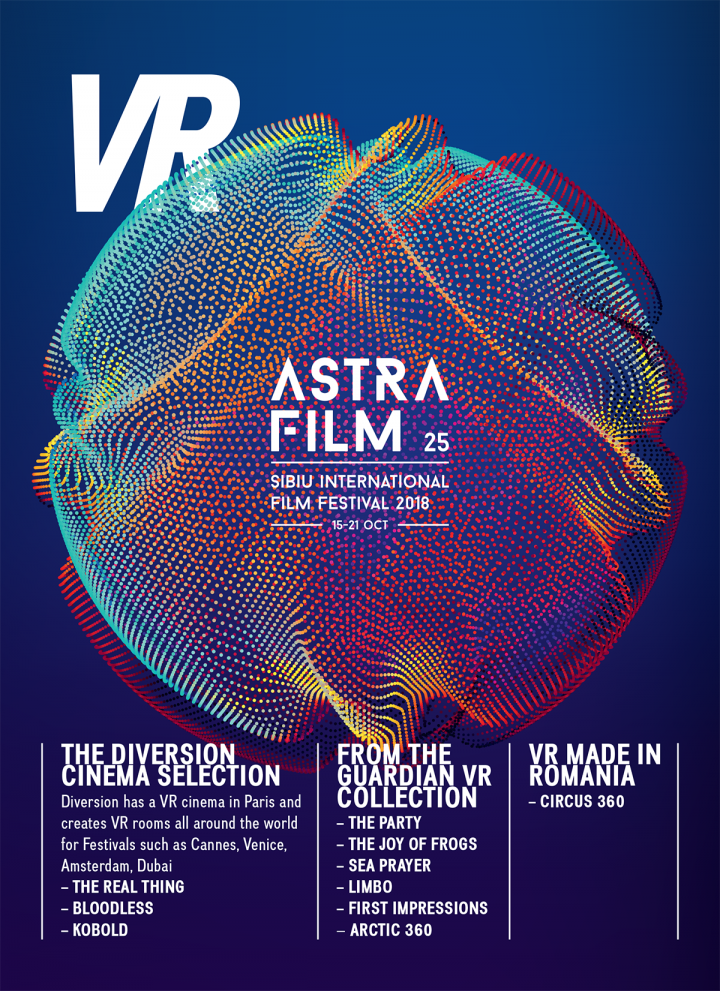 A selection of 28 immersive documentaries will give the audience at the 2018 Astra International Film Festival the opportunity to take a unique look into the future. Between 15 and 21 October 2018, in the Dome located in Sibiu’s Grand Square, moviegoers will be able to experience the future through 10 virtual reality nonfiction movies as well as 18 full-dome, 360-degree projection films. The Future Is Today special section is dedicated to the new documentary formats, shot with innovative technologies, and was introduced in the main festival program in 2016.

The VR category comprises 10 films, of which 6 come from The Guardian’s VR collection: Arctic 360, a testimony on the human impact on the Arctic ecosystem; Limbo, a virtual experience narrating the refugees’ wait to receive asylum status; The Joy of Frogs, a 360-degree format documentary about the mating season; The Party, a virtual exploration of autism; Sea Prayer, a VR animated version of a Khaled Hosseini story, inspired by the commemoration of two years since the death of little Syrian refugee Alan Kurdi, and First Impressions, a magnificent VR film about how a newborn experiences and interacts with the world.

Another three titles were selected in collaboration with Diversion Cinema, a VR program designer for major film festivals like Cannes, Venice, Amsterdam, and Dubai: The Real Thing, Bloodless, and Kobold. A Romanian production rounds out this year’s VR program: the observational documentary Circus 360, by Dorin Moldoveanu, about Bucharest’s first animal-free circus.

AFF 2018 includes 18 full-dome nonfiction films that explore scientific mysteries (Faster Than Light), hidden corners of the Universe (Astronaut, Closer to the Stars, Oceans in Space), and little known details about humanity and our planet (Dynamic Earth, Our Violent Planet, The Mayans’ Cosmic Planners, Sky on Fire). A couple of more abstract films explore new ways to experience art, such as Stardancers’ Waltz, Contraluz, After Cherenkov, and Liminality.

The full-dome program of Astra Film Junior, a festival-within-festival that is part of AFF and this year celebrates its 10-year anniversary, includes films about the Universe (The Secrets of Gravity, We Are Stars), nature (Life of Trees), and the human body (Amigos – Inside the Human Body).

In recent years, increasingly more filmmakers and visual artists are harnessing the huge potential of the new technologies to create immersive stories. As a venue deliberately designed to facilitate the exploration of reality through all available means, Astra Film Festival presents a full storytelling experience that spans a broad range of approaches, from conventional nonfiction cinema to immersive and interactive films. AFF’s special section The Future Is Today gives moviegoers the opportunity to experience first-hand how the digital revolution transforms the art of documentary filmmaking, by allowing them to interact with the films’ protagonists and events, either using VR sets or by attending full-dome screenings. The Future Is Today section films will be screened in the Grand Square – the full-dome films in the Grand Dome and the VR features in the Little Dome.

“We are happy to see that Astra Film Festival has cultivated a loyal and educated audience of movie lovers who are able not only to explore and understand the world we live in but also to dive into reality and experience the immediacy of feelings and emotions, so they can later play a part in changing things and human relationships. The festival has constantly attracted curious and creative people, for the most part young – more than 60% of our visitors are between 18 and 34 –, and the way we integrated nonfiction productions shot with the new technologies continues opening the festival to new audience segments, including foreign festivalgoers”, said Dumitru Budrala, Astra Film Festival founder and director.

The full program of the festival can be consulted and downloaded here.

The tickets to Astra Film Festival 2018 are available online at www.eventbook.ro and in all Humanitas bookstores in the country. A full guide to purchasing tickets and day passes, the program of ticket booths and access to movie theaters and events is available here.

The Astra Film International Festival in Sibiu debuted in 1993 as a breakthrough project for Eastern and Central Europe and for the past 25 years has significantly contributed to the establishment of a development framework supporting documentary filmmaking throughout the region and especially in Romania. Astra Film Festival has constantly highlighted the art of nonfiction cinema, supporting its development and opening new horizons for filmmakers. Astra Film Festival 2018 is organized by Astra Film, CNM Astra and the Astra Film Foundation, with the support of the Sibiu County Council, the Ministry of Culture and National Identity, and of the Romanian Film Centre. The event is co-financed by the Sibiu City Council through the Sibiu City Hall, and by the European Union through the Creative Europe Program.